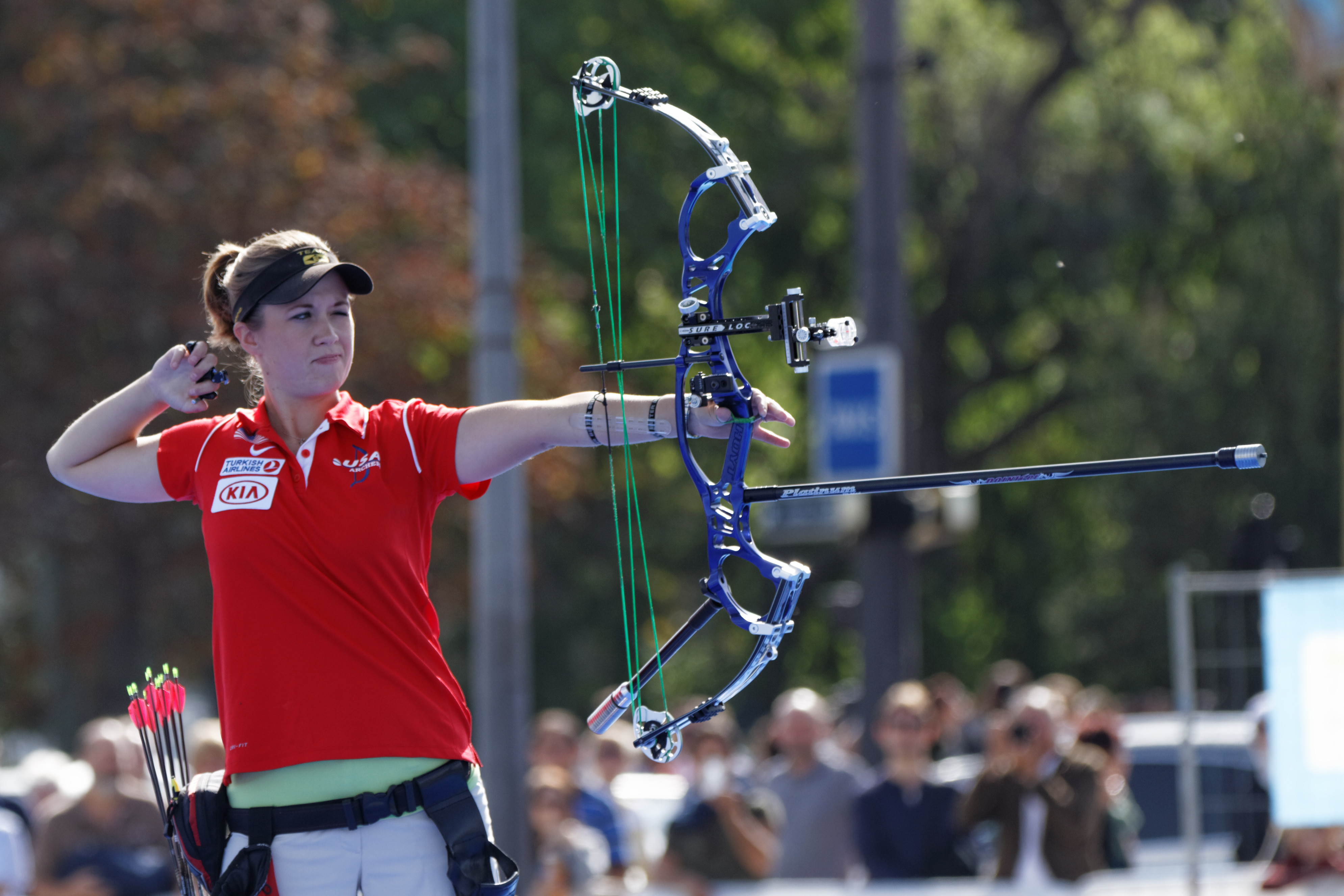 These bows are designed and built to hunt. They can boast high poundages (some hunters shoot well above 60lb bows) which helps with arrow penetration, a high let-off which makes holding the bow at full draw much easier and other helpful bits and bobs like a scope, peep sight and release aid. All of these little things help make it easier to make the arrow fly fast, silently and accurately.

However, compound target archery has taken off in the last 20 or so years, to become a very popular sport in its own right. The best compound archers in the world regularly shoot 1400+ on a Gents’ FITA, putting all their arrows in the 10-ring at 30m! So compounds are a serious piece of kit and although some people refer to it as the “dark side” of archery, or that you’re shooting with “training wheels”, don’t be discouraged. Compound archery is very technical and as much of a mind game as it is about physicality with many choosing the sport (like myself) due to prior or existing injuries.

This page will hopefully explain some of the key aspects of a compound bow, so you can understand any conversations that compounders might be having about a new shiny that has come on the market and why they like it so much!

Compound bows are very specific to a person. They have to have a specific draw length which suits the person who intends to shoot it. For instance mine is set to 26.5” drawlength, although it can be adjusted between 26 and 27.5” using the cams. The amount of adjustment depends on the cam. My Hoyt Contender has a GTX cam which gives it an inch and a half of adjustment, whereas the Spiral X cam has much less, and Hoyt’s VersaFlex cam (on the Hoyt Ruckus) has much more at 18-28”. Cam systems differ from company to company and not having shot anything but Hoyts myself I don’t know a huge amount about them, but they can be split into groups of cam (see aggressiveness of cams).

If you wanted to shoot compound, you must make sure that the bow first has the right drawlength for you. Although it would be incredibly funny trying to watch someone with a very large draw length shoot my compound, it could also be very dangerous as they would have to bend their arm or anchor in a weird position to make the bow work properly for them. Similarly, too long a drawlength on a bow can be problematic, as you won’t be able to make a consistent shot as you will have to move your head into position each time. It’s best to let someone else watch you shoot and see where the best drawlength is for you. Alternatively, go to a shop and get them to set it up for you. My drawlength increased by half an inch when I went to Clickers, so there are always different things one can do to get the drawlength just perfect.

Draw weight and Let Off

A compound will usually be given a draw weight on its limb. This is the highest possible peak draw weight that it can acquire. However, it can often be adjusted. My Contender is a 60lb compound, however, as with all compounds listed with an upper limit like this, it has a 10lb weight range BELOW this value, so currently I’m shooting at 53.5lb peak draw weight. In contrast, my old Ruckus is listed as a 45lb bow, BUT it has adjustment depending on drawlength AND draw weight. Therefore it can be stacked to above 45lb, if you put it on a longer draw length setting than the middle one. Also, it has longer screws meaning it can be reduced in draw weight to much more than 35lbs. So it can go from 20lb to 40lb on the 18” draw setting, or 30lb to 50lb on the 28” draw setting. Basically, the limbs on the bow are just as important as the drawlength. If you can’t pull a 50lb bow, then there is no point buying a 60lb bow hoping you will eventually get there, as you’ll just injure yourself.

The ‘Let Off’ for a compound is the amount (usually given in percentage) that the bow will lose after coming over the peak draw weight and coming into settle at full draw in the ‘valley’ (see aggressiveness of cams). Usually most compounders will shoot with something like 65% to 75% let off meaning that their 54lb compound will only equate to around 13.5lb to 18.9lb on their fingers (or release aid). This makes it much easier to hold the bow at full draw for prolonged periods of time.

This is a bit of a difficult one to explain, but different cam geometries will feel either more spongey or solid, aggressive or rough. A circular cam gives a very simple let off ie it goes up and comes back down, but this gives a lot of opportunity for the archer to creep forward and make silly looses. For a novice archer, too aggressive a cam will mean any slipping forward at the release aid end will cause the limbs to start pushing forward and therefore probably inducing a bad loose. Too spongey/not aggressive enough and the archer will slip forward gradually and again get bad looses from it. In theory, if you have the same technique on your back everytime, then the cam geometry does not matter. But aggressive cams tend to be faster as they stay at peak for longer and then drop down into a sharp valley, thus storing more energy in a draw force curve, whereas the circular cam will store less and be slower as a whole.

Parallel limbs bows are those which when they are under tension the two limbs are parallel to each other. This gives a quieter bow in general, as the vibrations go up and down in tandem, rather than everything clattering in the forward direction. However, they tend to mean shorter A2A (see below), and therefore are more suited to bow hunters, rather than target archers. Vertical limbs seem to be more efficient from what I know, but I may be wrong. They’re certainly favoured by the target shooters anyway.

This is the distance between the two cams. As with recurve archery, a longer axle to axle (or limb tip to limb tip) length will generally give a more forgiving shot, but a shorter one will give you a faster arrow speed. Both of these factors have to be taken into account when wanting to shoot outdoors, as a long draw length archer will get lots of speed out of a bow, but will have a less forgiving shot. Hunting compounds have shorter ones as you want the speed out of them, so these tend to be very short (less than 33”), and target compounds tend to have upwards of 37”. Tall archers will want even more though.

As with recurves again, the brace height is the distance from the centre of the grip to the string. This is important in a compound as it determines again how forgiving the shot will be, but also arrow speed. A short brace height will give high arrow speed but less forgiveness and vice versa. Also, a short brace height could lead to an archer hitting their arm frequently. Hunting compounds therefore tend to have shorter brace heights below 6”, and target compounds have a larger one around 7”. Although this doesn’t seem to make as big a deal as one might expect if you consider like an ⅛” difference between two bows. Note also that compounds will have a neutral tiller.

This is a bit of a weird one, as it combines everything above really. The power stroke has something to do with the relative draw length to brace height and A2A of a bow. A short drawlength archer does not need as long of an A2A to get the same forgiveness out of a bow as a long draw length archer. Therefore on something like Rocky, the longer the drawlength will be very unforgiving, so you wouldn’t want to give a 30” drawlength archer, a 30” A2A bow, as they’re never going to get the forgiveness out of it. However, a shorter draw length archer will have a more forgiving set up as the 30” drawlength archer. Also, a short brace height comes into play as obviously this will make a long draw archer have a more inconsistent shot, whereas it doesn’t affect the short draw length archer so much. All in all, it means that if you want a compound bow to suit everyone, you’re not going to get it, as long draw archers are going to be significantly negatively affected by such a short A2A and brace height that most very adjustable bows give. Really, you want one bow for short drawlength archers and a separate one for longer drawlength archers, or find one which has a very big A2A and Brace Height naturally. The only problem with that is that short draw length archers will be very negatively affected in terms of raw power. As an example of this, my compound should give 313fps. It gives around 245 as I shoot 3.5” below standard drawlength for compounds, about 40 grains per arrow heavier than standard and other bits and pieces contribute. So it’s something to think about when looking at compounds.

These have to be installed for each person. Therefore once one is installed, only one person can shoot this bow.

Other things to consider

When looking at compounds, one must always consider the little things. You are buying just the riser and cams and string. You still need a good long rod (ie a Doinker/B Stinger/Fuse/ACE etc), so a club Cartel will not suffice. You also need to buy the optics separately from the sight itself, as manufacturers do not make them together. You will need to buy a release aid, which can be of various different makes. The easiest to learn on is the index release, but I would implore the club to buy a thumb release aid for any new compounds, simply because index releases lead to bad form long term and back tension ones are too unruly for a novice compounder to use correctly without possibly injuring themselves. Also one must consider that arrows are going to be more of a problem for compounders simply because they will go up poundage very quickly, and will require respining of arrows as well. While the club has a set of ACCs, they’re only 27” or so long, so unless the club wants to buy more of this sort of arrow, one has to be wary of this.

After all that technical stuff, here is a list – though not completely exhaustive – of the bits of bow you should be looking to purchase and why I like them. The riser is the main thing, and it’s of course very important having read above that you choose a bow with the correct drawlength, cam, poundage etc. Then you should look at what stabilisers, sights, rests and release aids you want to use and then finally arrows.