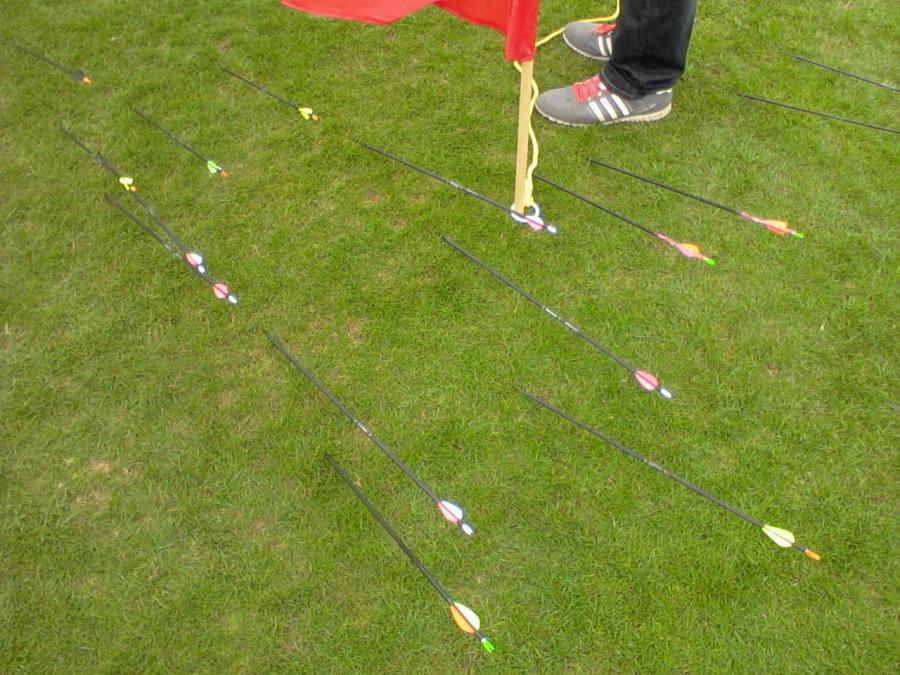 The 2nd British Universities Double Clout took place on 28th April with more universities taking part this year, partly because it was held the day after a SWWU match, though we found that SWWU banter is positively tame compared to SEAL banter. Southampton didn’t have the opportunity to defend the mixed bowstyle team since David Williams hurt his arm at the previous day’s Alumni shoot. This left a squad of 8, though this seemed dubious early on as half of the team arrived late for various reasons, primarily by missing the bus (Stephen Fawcett, Janna Collier, Andrew Howe), though the driver, Matt Leivers, had set his phone to silent which meant his alarm didn’t go off. Fortunately, driving to Bath is a straightforward journey, and the events demonstrated why we always make sure we leave plenty of time to get to the competition.

The team was in various states of fitness, either due to drinking all manner of strange alcoholic drinks the night before and having minimal sleep or by being ill. James Nelson also had a report to write, though as he was one of the indisposed participants described above, the minibus had to pull over two-thirds along the way to give him the opportunity to throw up. Fortunately, the fresh air was sufficient to calm him down. We were forced to take the safety bus, which only seats 9, but now is Fiona Walsh’s favourite bus. She would like to take it to BUCS Outdoors, apart from the fact that it only seats 9. Matt and Declan Ashworth spent a lot of the journey fiddling with the radio, looking to find some music that would get us hyped up, but in the end settled on some smooth jazz that probably had the opposite effect.

We arrived just about on time, though the start of the event was late anyway. The new clout archers received their lesson in how to shoot, which gave Stephen (who shot last year) enough time to get everything out of his system in the changing rooms (there was a good reason for him missing the bus earlier). Despite shooting last year, Liam McDonnell and Stephen took a little bit of time to find their reference point with carbon arrows, and it was the barebow of Fiona Walsh that looked to have made the strongest start during practice.

Though before long, ‘King Novice’ Andrew showed that shooting a 125m clout was no challenge to him either as the senior gents would observe him admiring his arrows dotted within the 5-ring every end as they walked to their 165m target, much to the envy of pretty much everyone, including his own team-mates who found his scoring prowess faintly ridiculous. Declan also consistently picked up points, hitting with almost every arrow. In the second clout, some of the archers started to fade, though Stephen managed to accelerate, eventually getting four clouts in the final end (along with a miss).

Southampton won more raffle prizes this season, Liam winning a bottle of Pimm’s, and Declan winning a box of chocolates that he shared around with his team.

The competition ran late, which meant that we couldn’t collect our prizes as we had to return the safety bus. However, we are still waiting to be sent our prizes. There are also technically two sets of results (both attached); one includes the team scores, and one has a correction that states that Liam shot barebow rather than recurve to win the bronze medal (despite already counting for the barebow team). The barebow team finished last though (or 5th as Fiona would put it, before realising it was last), as James struggled to find his range and Fiona eventually was too hungover to continue shooting properly.

Janna Collier won the novice ladies competition for Southampton (since it wasn’t a BUCS-related event), and the main plaudits go to Andrew, who won the novice gents competition by dropping a mere 19 points in the entire double clout. Andrew, Janna and Declan’s respectable 7th place was good enough for the recurve team to finish 2nd to the hosts Bath by only 3 points. Jake’s universities longbow record from last year has now been broken, by virtue of someone from Warwick scoring a point (he got 158 of them in the end).

On the way back while trying to fiddle with the radio, Matt discovered a setting on the bus called ‘cruise control’, which took him by surprise when he found he didn’t have to keep his foot on the accelerator. Somewhat worryingly, he described the experience as being in a video game, even though he was driving real people. But this was not an issue, as since this was a video game, if we crashed then we would be able to load a previously saved game…

There was also mild drama when we tried to return the minibus as the receptionist in the morning hadn’t signed the keys out properly, which had prompted the union to investigate itself for wrongdoing while we were completely oblivious and had hold of the keys the whole time.