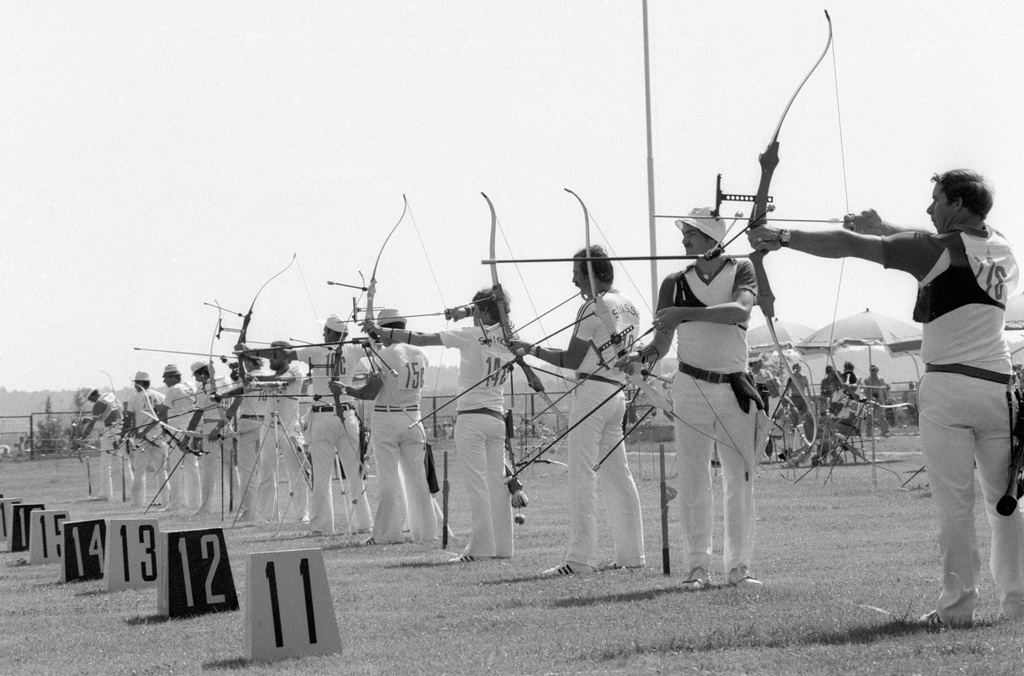 The first records of Southampton University Archery Club (SUAC) date back to 1953 (making us the oldest English University archery club?) when such interesting rounds as a Columbia and Short International existed, it was possible to get a negative handicap and you couldn’t buy bananas (probably). We held our own internal competition called the Mead Head Challenge Trophy which seemed to have lasted until 1968 and competing in competitions throughout the ’50s, we won the vast majority. Some notable matches during this decade being against Oxford Uni whom we won in ’56 and ’57 and against Bristol against whom we won both home and away from ’56 to ’59.

One unusual competitor in this era was the Naval Stores Woolston AC. Who they were or what they did I don’t know, they just seem interesting.

Links with Oxford and Cambridge started in 1958 with the Three-Cornered Match held in Oxford which in 1958 was a Western. The results were Oxford 2272, SUAC 1987 and Cambridge 1978.

At the end of the ’50s, SUAC hit a low spot as this Three Cornered Match shows (Albion this time), Cam. 2474, Oxfd. 2468 and SUAC 1476. In fact, in the last couple of years of the ’50s, SUAC lost almost every single match, although they still managed to beat Bristol.

However SUAC has never been a club to lie in the gutter like a drunken student and in 1961, with the arrival of DK Jenkins, SUAC was bouncing back like a Space Hopper as the Three-Cornered Match (and Bristol now) shows. This time it was the turn for Oxford to be humiliated. (Albion men, Windsor women) Cam. 2013, SUAC 1554, Brist. 1539, Oxfd. 899 (he he he). 1962 saw two competitions against unusual teams occur. The first against Southampton Archers Ordnance Survey at Slymouth Barracks and the Second against Ealing Archers at Ringwood Road Drill Hall, Toton. Between 1963-5 saw a change in handicap rules, and in the 63/4 academic year, we find a postal league between Sheffield and Bristol which SUAC won. The Inter-University Postal League was hosted by SUAC in 1964 which saw 7 universities taking part. These were (in order of winning) Sheffield, Cambridge, SUAC, Bristol (once again beaten by us), Oxford, Leeds and Edinburgh coming last. The good run of SUAC lasted well into the ’60s as the 68 postal league testifies. (In order-) Edinburgh (A), SUAC (A), Oxford (A), Aberystwyth (whatever happened to them?), Manchester, Bristol, Swansea, Edinburgh (B), SUAC (B) and last and in this case quite least Cambridge (gasp). We managed to notch 2nd in 69/70 and 3rd in 70/71.

The British University Archery Federation indoor tournament was held in 1972 at Liverpool Uni which was won by Edinburgh. SUAC was beaten into 3rd place by Oxford who only came second by having more golds! In 1976 SUAC had the honour of holding the National Indoor Archery Championships at Calshot Indoor Activity Center which saw 142 people taking part and 38 teams entered (SUAC had 5 teams alone)! Edinburgh won (again), Oxford came 2nd (again) and SUAC was 3rd (again). One of those unusual matches occurred in 1977. This time against Southern Gas Archery Club. Throughout the 70’s SUAC always reach 2nd or 3rd place in the postal leagues, always beaten by the seemingly unbeatable Edinburgh team who were trained on a strict diet of porridge and haggis. Helping us during this era was Wendy Pitkin, Richard Dracott and Roger Stephen who still hold club records. The end of the ’70s/early ’80s again saw a change in the handicap system, removing all negatives from the handicaps.

The ’80s saw a surge in pop music but were a dark time for SUAC in the sense that only a few records remain. Perhaps it was because we had such a strong team and won so many competitions that enemy agents were sent to destroy all records of SUAC. Rumour has it that we even competed in a European Competition which we won, and as this competition has never been held since, we are still European champions! Alas, we may never know the true stories of this epoch until these records return.

Records have been found for the late ’80s/early ’90s and records have been broken (some dating from the ’60s). Although it amounts to only a handful of score sheets it gives a good idea of how good we actually were.

We are now into the ’90s and Southampton has had a mixed fortune. Although never quite reaching the heights of its glory days and almost vanishing from existence in 1994/5 SUAC is slowly clawing its’ way back to the top. Already we are training archers up to world domination level and soon the name of SUAC will be appearing on many cups and medals. Just you wait and see.

1997 has seen a slight revival in the fortunes of SUAC with its captain, Simon Scott achieving a place in the Hampshire County squad for compound. Furthermore, in a friendly against Bath Uni, SUAC came first in all categories and second in all but the Team (obviously). Plans are afoot for next year to promote SUAC as the best archery club ever.

In the 97/98 season, SUAC is still going strong. A few high scores (540’s+ Ports) have been shot by four members and although we always seem to miss out on the medals in the team competitions, we are now starting to regularly get 2100’s in the Team events for Portsmouth.

The return to Bath this year was a bit unfortunate with almost everyone showing poor form, however, despite this we still won several medals. The BUSA indoor to Dundee was one of the best ever trips organised and there were several good performances.

The 98/99 season saw a few medals won at Bath by Gordon Bushel and a few others. The BUSA event was a bit disastrous with a long trip to Exeter being blamed (and also crap shooting). A frostbite on the Isle of Wight allowed John Myers to position himself in 10th place out of 50 competitors.

99/00 has seen a slightly more active SUAC get to Edinburgh, Bath again for the BUSA indoors, Salisbury, Andover, Portsmouth and Brunel. However, with members who are still finding their way and less university only competitions, the outside world has made it hard for us come away with any medals this year.

Entering the millennium we have been becoming more and more like a “real” club. Recently we have been receiving top quality coaching from Gary Carr and Pete (Gary is the county coach and Pete shoots for England). Already we have had one member shooting a Portsmouth PB of 575 and another member shooting in County trials and we held our own outdoor competition (an American). I feel like it’s going to be a good year for us.

Apparently, Parker dates from the 01/02 academic year (around the time that Jon Parker was club captain). There was allegedly another club mascot at the time (a black wolf, or something similar) but it succumbed to the risk that all archery mascots take, and was shot at in about 2004, leaving Parker as the only surviving mascot.

Into the 2nd decade of the Millenium, and SUAC are off to a great start, especially our novices (no doubt a large part due to our Head Coach Gary), taking medals and records left, right and centre. 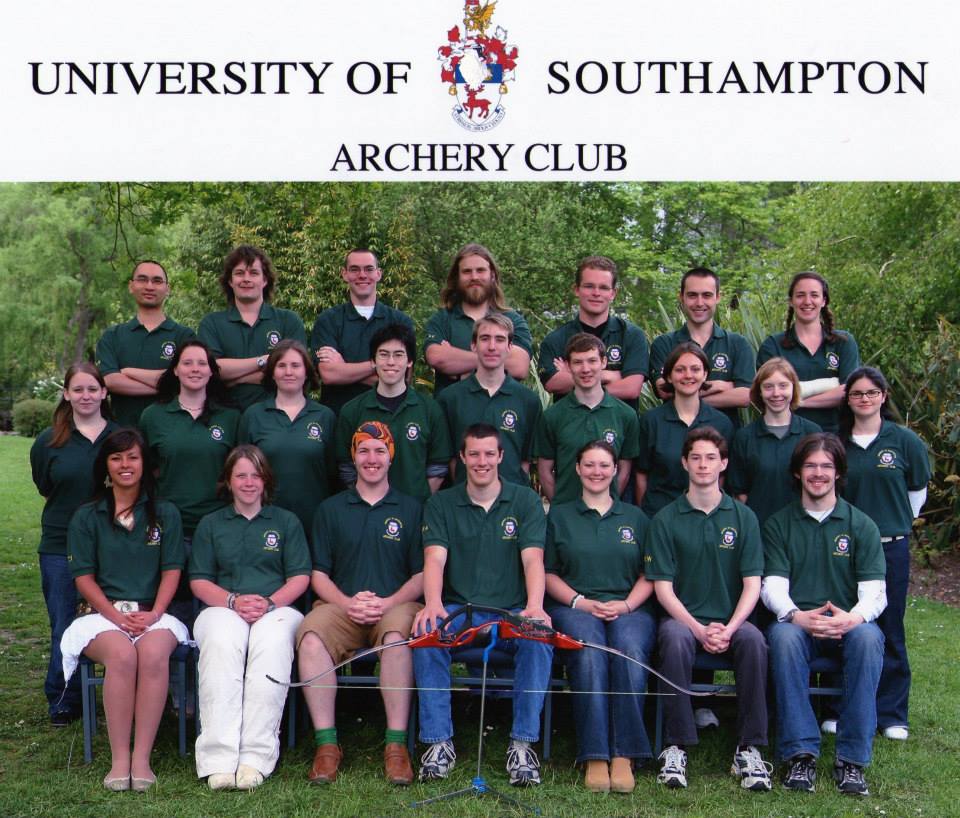 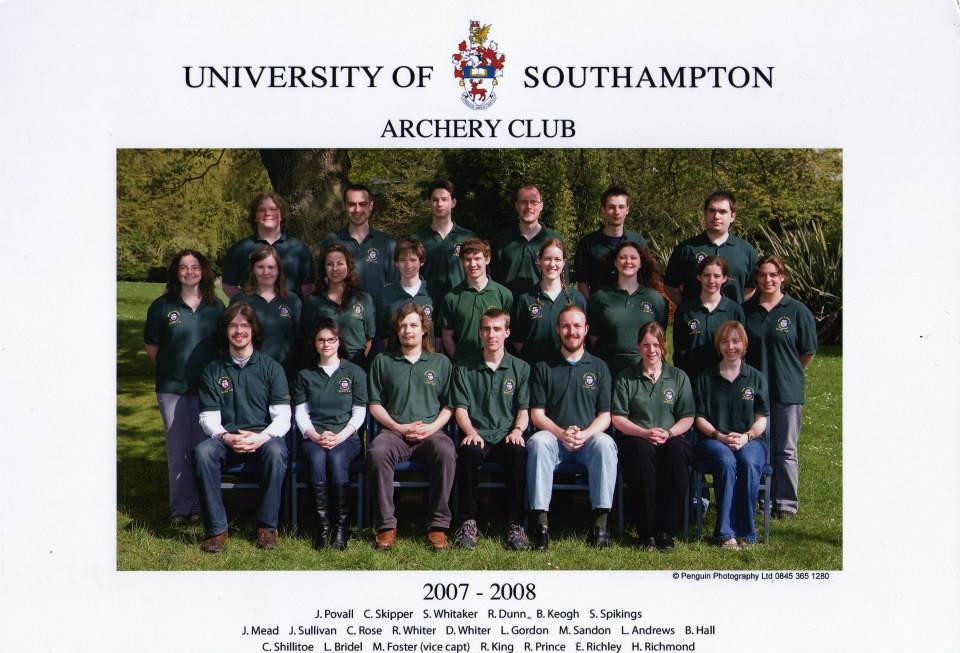 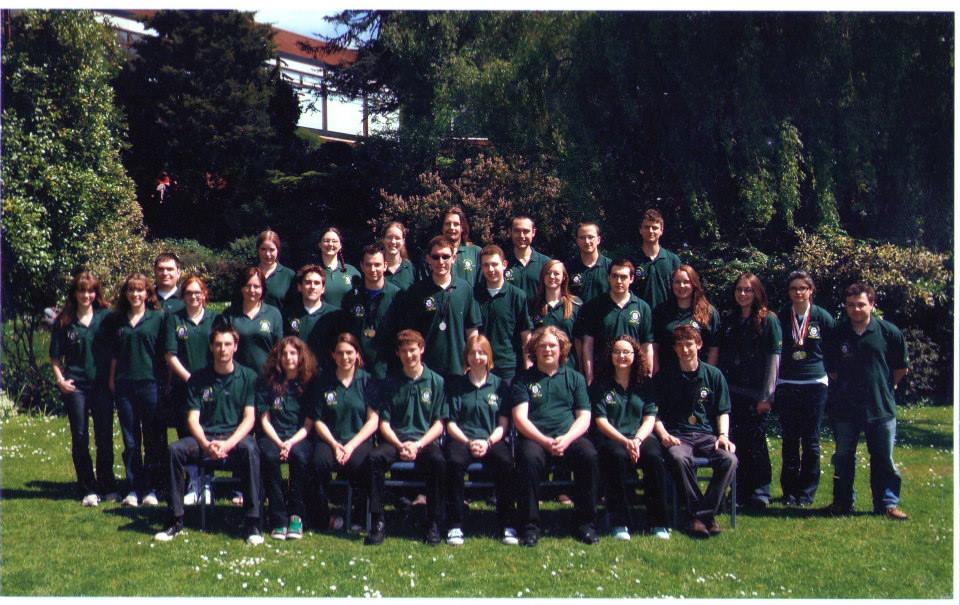 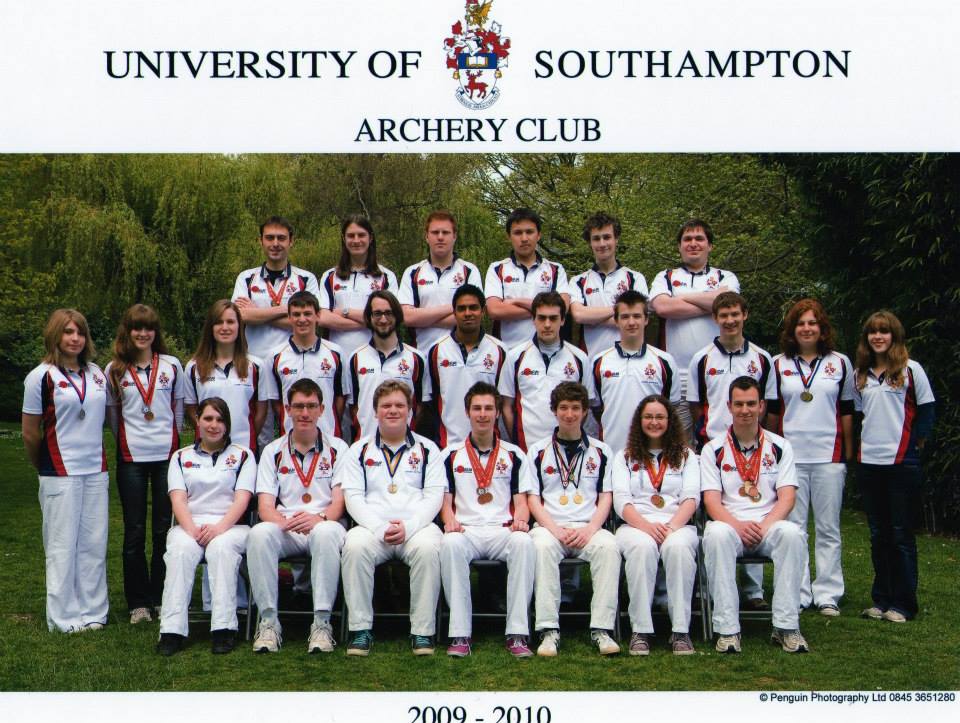 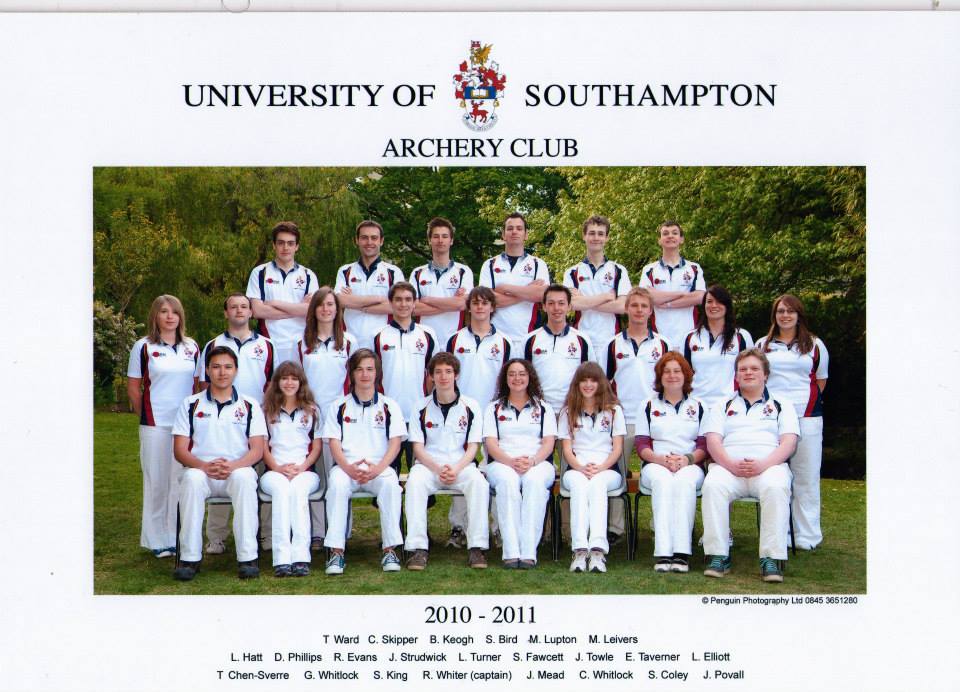 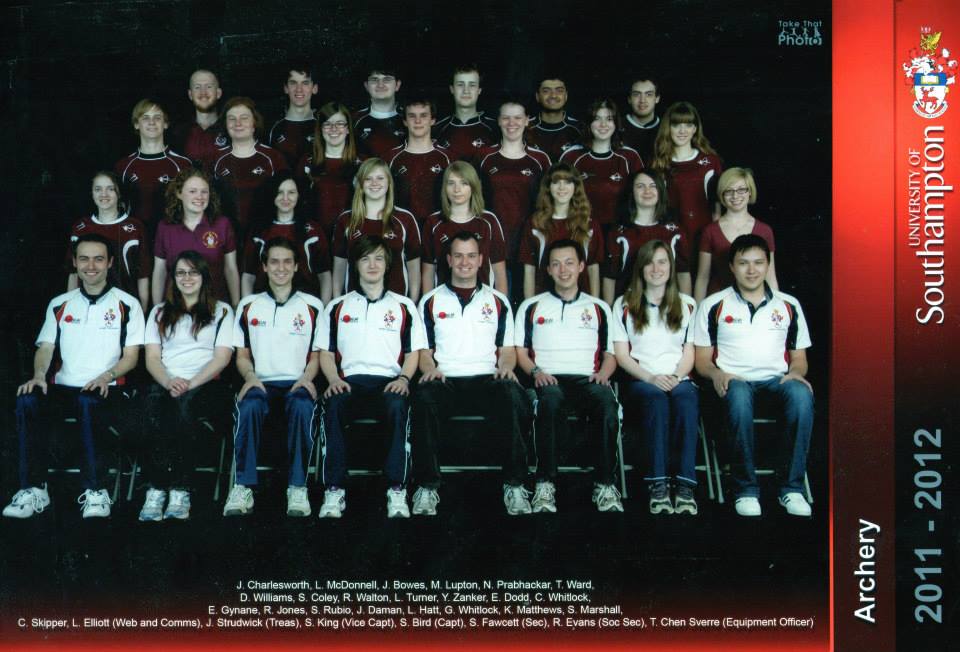 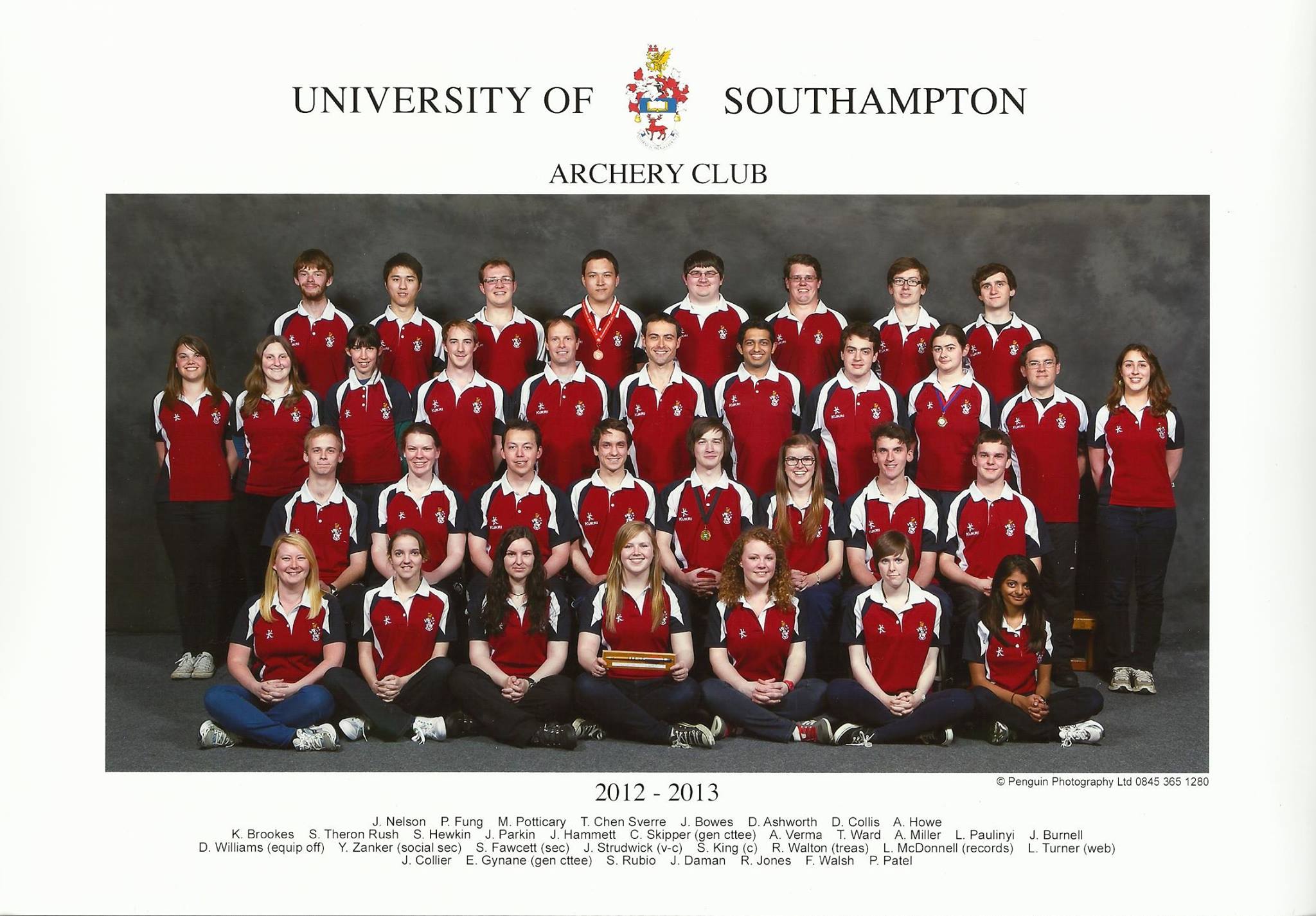 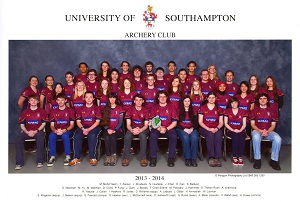 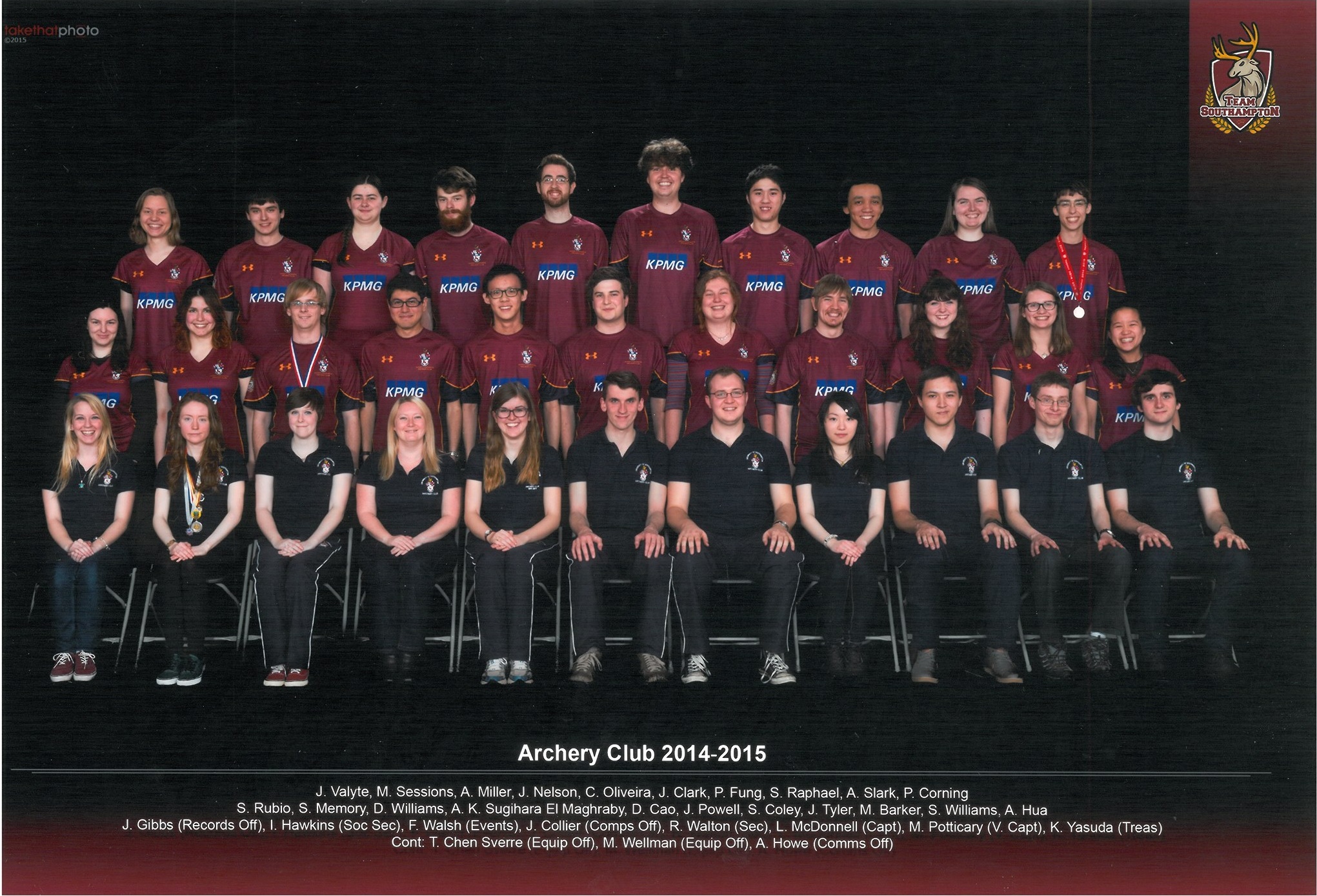