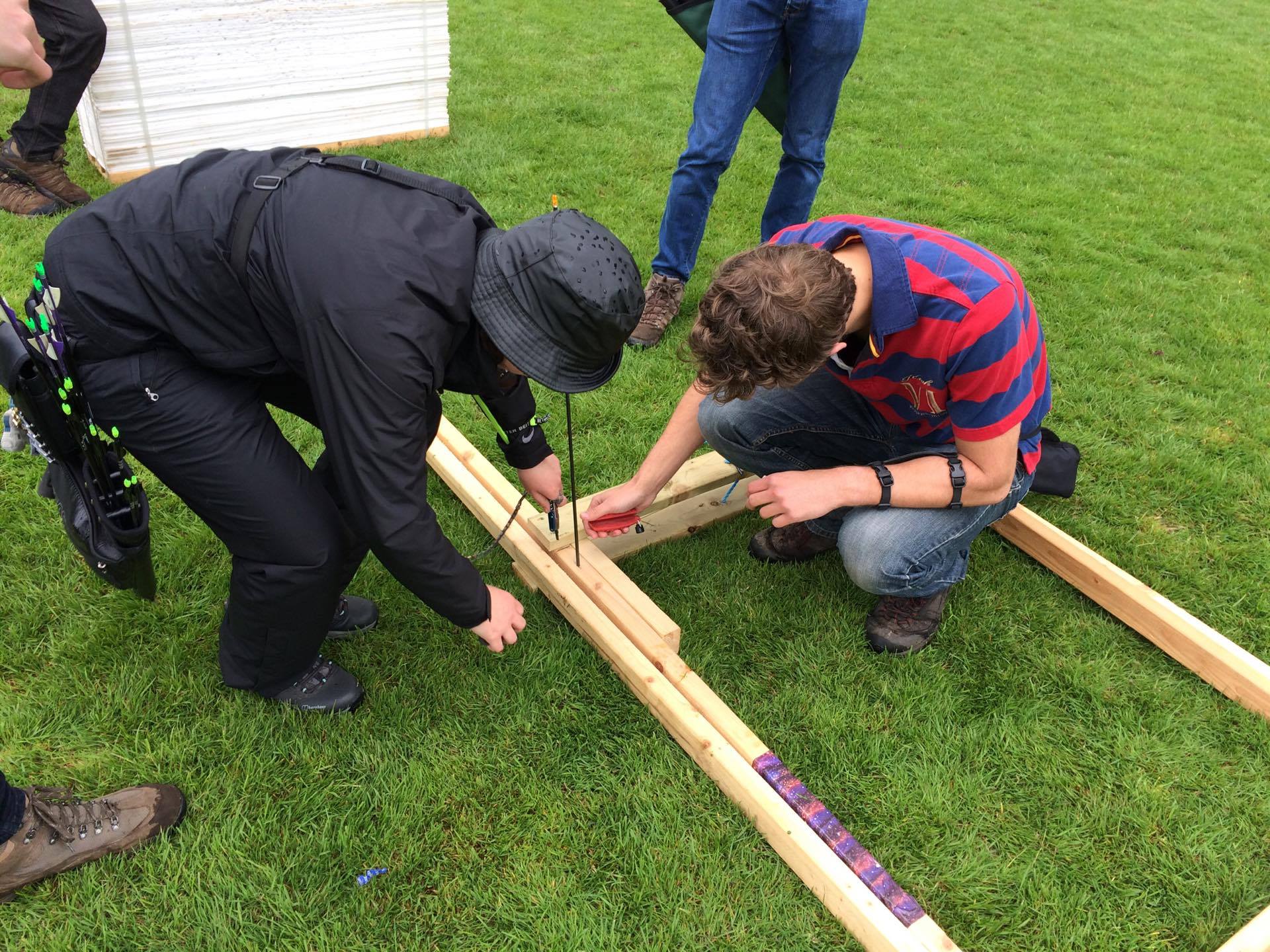 Taking place a mere two days before the entries to BUCS Outdoors closed, the chief purpose of the match was to seek qualification for as many archers from each university as possible. High initial interest dwindled, as several people either qualified beforehand, withdrew due to coursework pressures, or chose to rest before the Southampton AC FITA the day after.

Stuart travelled up to Exeter the evening before, staying with friends from his time shooting with Exeter. After confirming that the previously forecast thunderstorm was no longer scheduled to roll across the city during shooting hours, he settled down, trying to pretend that he wasn’t a traitor back in the club he’d left.

Unfortunately, Callum had to withdraw from shooting due to illness, bringing the proportions of archers dangerously close to the limits to qualifying shoots imposed by BUCS.

After a bright and early start for all involved, Stuart arrived at the field at 10am to set everything up, only to discover that despite their assurance that the necessary equipment had been moved to the range, one of the foam bosses was still on campus thanks to the fantastic organisation abilities of the AU. A slightly concerned effort to get in touch with the grounds staff was made, and fortunately the boss was recovered and brought to the field in time for Abbie, Nick and Sara to arrive after their 100 mile journey. Bows were set up, and shooting began.

Due to some issues with her leg, Abbie elected to remain behind the line, while Sara collected and scored her arrows. Off to a good start, both Stuart and Exeter’s compound archer Luke slammed arrows into the frame, and Luke snapped another in two with a glancing impact. While Stuart’s arrow was removed from the frame with relative ease, Luke’s had to wait until the first distance change, requiring a team of four to extract it. The rest of the shoot was uneventful, other than the intermittent Exeter weather providing bursts of rain, sunshine, rain, sun again, a bit more rain, some wind, more sun, a bit of rain…

After shooting, tracks were made for the Imperial (the largest Wetherspoons in the UK) which, due to the Chiefs v Saracens game that had taken place in the city, was completely packed. Tables were found outside, and after scores were checked, the results were announced, with Southampton taking the top two places in the only contested category, and Exeter’s Novice Gent Longbow qualifying, giving Hamish a challenger to face at BUCS.

While Abbie, Nick and Sara returned to Southampton, Stuart stayed in Exeter, sorting out the results sheet for the purposes of BUCS entries, and returned home on Sunday night.